UPDATE: 1.01.2020: To my devoted and patient readers and listeners. The last three years of writing and podcasting is thanks to the support I receive over at Patreon. In 2019, in addition the subscriber specific content, I started giving away free stories every month on Patreon.com/philrossi.  There is a lot more content out there than I’ve got listened below.  There are nearly 100 new podcasts episodes available on Patreon.
Become a Patron!
Crescent
Amazon.com Best Seller: #1 in Movers and Shakers, #5 in Horror, and #52 overall.
LISTEN to the promo
GET the free audiobook
Buy the PRINT edition! 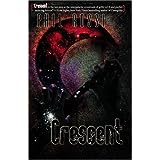 Darkness has inspired fear since mankind first watched the sun go down. Bad things hide in the dark feral beasts with mouths full of razors waiting for a taste of flesh. But now, the darkness is stirring with a life of its own. Crescent Station is the last bastion of civilization, floating in the cold, outer systems where colonized space gives way to the sparser settlements of the Frontier. Like the boom towns of distant Earth s Old American West, Crescent Station is a gateway to power, wealth, and opportunity for anyone who isn t afraid to get his or her hands dirty. But deep within the station s bowels, in Crescent s darkest and most secret places, an ancient evil is awakening and hungry, and it threatens the very fabric of space and time. Will the residents of Crescent Station find a way to stop it before the terror drives them insane? Or is it already too late?”CRESCENT is the last stop at the intergalactic crossroads of gritty scifi and pucker-inducing horror–Blade Runner as written by H.P. Lovecraft, a horrific hard scifi express-ride.” – Scott Sigler, New York Times Best Selling Author of Contagious“Space opera – of the Sweeney Todd or Phantom of the Opera variety. That’s right. Phil Rossi has crafted a space station tale with sex, horror, and vibrant attention to tech and human detail. Evocatively served, highly recommended.” – Paul Levinson, author of The Plot to Save Socrates
HARVEY
GET the free audiobook
Get the eBook

Calvin Hubbard had what it took.  Swagger. The voice. The star quality.  He stole America’s heart and walked away with the crown of Idol Search. Before the door could hit him on the ass, Calvin was dethroned–all because of a little extracurricular activity involving a female judge and a set of handcuffs. Now, he needs to record an album to avoid a lawsuit. His credibility as a musician is on the line.  Leaving the media frenzy behind, he heads to a fly-speck town called Harvey, Virginia to write his opus. Something sinister hides in the woods outside of Harvey-—an evil older than the trees themselves.  It’s hungry and it’s tired of waiting.

EDEN
LISTEN to the promo.
Get Eden Podiobooks.com

The tree is beautiful and they call her Eden. Her branches reach for the stars. She is like all other trees on planet Earth save for her enormous size. Still, she has leaves and she has bark. She turns sunlight into life. But this tree does not sprout from the dirt. Eden fills the sky, high in orbit above the blue expanse of Uranus. There she changes humanity’s very concept of extraterrestrial life. Dr. Malcolm Green is sent to Eden to audit a science team studying this extraordinary tree from the dark confines of space station Lola. But with unexplainable accidents plaguing the team, tensions are mounting between scientists and custodial staff. Is there a future for this project and Lola? Only Malcolm Green can make that call. From the second he sets foot on Lola, Malcolm’s own future becomes at stake. He soon finds that love, friendship, and his own mortality tremble like a leaf at the sound of Eden’s call.

NOTES FROM THE VAULT

LISTEN to the promo.
Get Notes Podiobooks.com